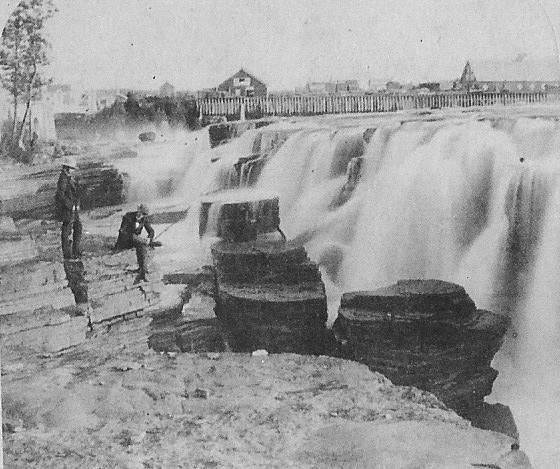 The Chaudiere Falls in the heart of Canada’s capitol has been harnessed for hydro since 1908, it was a breathtaking work of nature, a sacred and significant place to the first peoples of this land, a setting where the Ottawa River plunged in a spectacular array in the form of a horseshoe. Canadian artist and author of the mid to late 1800’s, William S. Hunter in 1855 wrote that it was only second to Niagara in its extent and in the height and referred to its kettle like appearance with, “seething and frothing of the surface, in its continual whirl, assist in completing the resemblance,” adding that the sun would often produce more than one rainbow over its surface. While some see its likeness as a horseshoe shape, and others a kettle—it’s also viewed as a cradle of Canadian civilization.

Its proximity to Victoria Island, known gathering place for first nations, a backdrop to Parliament, the role it played in the early days of colonization and the economy lend it historic significance and it has been rocked through the ages by a few Grandfathers. One grandfather of this country who rocked the cradle was Algonquin First Nation Elder Grandfather William Commanda, as he was and is respectfully known as, talked of the hope of returning the falls to its natural state before his death in 2011. He called the aspiration a “symbolic reconciliation with mother earth”.  At the time, he seemed to hold off Domtar from upgrading retired turbines at the dam, advocating freeing up the falls one step at a time.

Longtime assistant to Grandfather William Commanda and the Coordinator for the Circle of All Nations, Romola Thumbadoo says Grandfather was the former Honorary Chair of the Ottawa Heritage River Designation Committee and had challenged the 2006 Domtar (former paper mill) plan to expand hydro development at the Chaudiere Falls, reaffirming its critical importance as a sacred waterfalls. Thumbadoo says, “He wished to see it undammed to the fullest extent possible, releasing it from the industrial hold of the past two centuries, to follow the river’s natural flow, permitting the water to resume its oxygenating, healing and cleansing work consistent with the laws of nature. He was also concerned about safe passageway for the migrating American Eel, urging its placement on the endangered species list.”

Bob Chiarelli, another grandfather of this country and former Ottawa Mayor and MPP, also rocked the cradle siding with advocates for the freeing of the falls in 1998 as quoted in the Ottawa Citizen at the time, “I think it’s a very laudable initiative. I’m familiar with the unsightly characteristics and I approve of any initiative that would see that cleaned up and beautified.”

As of early 2014, it was announced that the Chaudiere was now slated for expansion and that it would mean 15-million in new revenue for Hydro Ottawa, sixty percent of that would be shared with the city of Ottawa.

Bob Chiarelli, now Ontario’s Minister of Energy, rocked the cradle once again but this time called it clean and healthy electricity further stating in an Ottawa Citizen interview, “It will provide some green money for the City of Ottawa to help them with their budget.”

Ontario River Alliance’s Linda Heron strongly disagrees pointing out that hydroelectric is a dirty form of power generation and does not provide green money, “The collateral environmental damage caused by dams and hydroelectric facilities has been well known for decades, including the loss or serious decline in migratory fish species; declining biodiversity, impaired water quality (including increasing mercury concentrations in fish tissue); and are key threats to imperilled aquatic species.” ORA, a non-profit organization set up to protect, conserve and restore Ontario riverine ecosystems has been working diligently in this effort now for three and half years under Heron’s direction. Heron adds, “The American Eel populations have been reduced to a mere 1% of their original numbers as a result of the numerous hydroelectric facilities along the Ottawa River system.”

The Chaudiere dam expansion will not be the only change to the area, Windmill Development of Ottawa had recently signed an agreement to purchase Chaudiere Island and Domtar lands slated for commercial and residential development, which is said will bring recognition to the site’s heritage value and its significant juxtaposition on the Ottawa River and the Chaudiere dam.

The struggle to free the falls goes on. Lindsey Lambert says he is disappointed in the former Ottawa mayor, “”We have the only national capital in the world with a major waterfall at its centre. The Chaudiere Falls were second only to Niagara before they were dammed in 1908. Apart from their great spiritual and historic importance, they have far more value freed for tourism, commerce and putting Ottawa on the map internationally than they ever will remaining harnessed for extra electrical generation.” Lambert, who is an active advocate for freeing the falls also has a stunning collection of Chaudiere Falls historical art work and photos.

So the cradle has a long story, and the infant in the cradle is the child of this country as it is the child who will have to deal with their grandfather’s decisions, and their story.