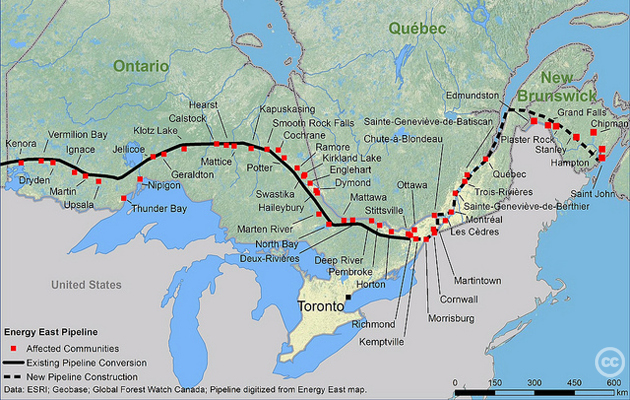 I have been aware for some time that Trans Canada Pipelines is proposing the establishment of a new pipeline to transport crude oil from the Fort McMurray area in northern Alberta to Quebec and New Brunswick. I attended a public information session, hosted by TransCanada, in Cobden, Ontario earlier this month.

The total length of the pipeline is 4,600 km, about half of which is in Ontario. Within Ontario, most of the pipeline already exists in the form of a line currently used to transport natural gas. This line would simply be converted to carry crude oil. Portions of the line have been in the ground since the 1950s, while a parallel line was laid towards the end of the 20th century. The vintage of the line proposed for conversion is not clear. The pipe is between 30” and 42” in diameter and varies in wall thickness. Modern lines use steel tubing, protected by an epoxy coating, but I have not so far been able to determine if the entire line uses this technology. Modern lines also use an applied electrical bias to minimize corrosion. The projected capacity of around 1.1 million barrels/day would make it one of the largest pipelines in North America – almost twice the capacity of Keystone XL.

The scope of the conversion would apparently involve adding a few extra shutoff valves to permit isolation of leaks in the vicinity of some rivers. The only new pipeline in Ontario would be a short stretch from Cornwall to the Quebec border. So, for the most part, we can ignore the environmental impact of the conversion process, and focus on leaks in the line itself.

The material to be transported is diluted bitumen (“dilbit”). At the meeting, I was told that “the chemical and physical properties of diluted bitumen are similar to other types of crude oils”, but this does not appear to be quite correct. The diluents contain benzene, which is carcinogenic, and once the material leaks into the environment, the diluents evaporate, leaving a material which sinks in water, compared to conventional crude, which floats.

I have not so far been able to access consistent statistics on pipeline leakage, but the following pie chart, which applies to Alberta crude oil pipeline “incidents” over the last 20 years, is interesting, and probably typical: 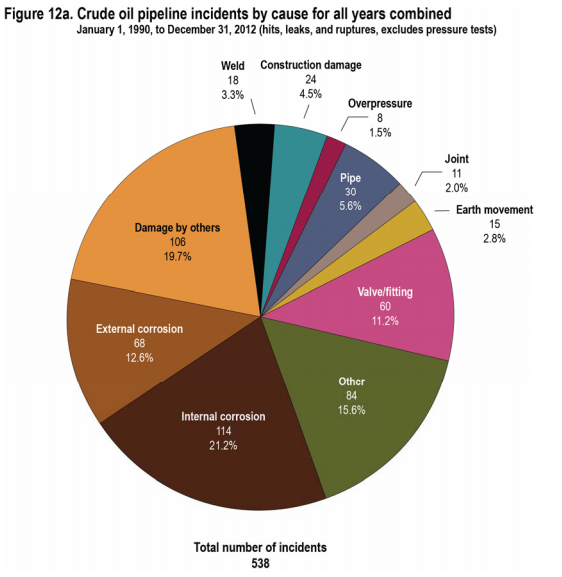 This chart covers pipelines of all sizes carrying crude oil in Alberta. The total length of these pipelines is about 20,000 km. You can see that about 1/3 of the incidents are due to corrosion, 20% are due to “damage by others” (presumably unauthorized digging), about 1.3 are due to known technical failures other than corrosion, and 15% are unattributed.

It turns out that TransCanada is claiming that the converted pipeline will have a much lower incident rate than earlier pipelines. At the meeting, I asked what technical improvements had been made to justify this claim. They mentioned two:

There does not appear to be any reason to expect that the 20% “damage by others” incidents will be reduced. The only way of addressing this is by signs and “do not dig” advertising, which has not changed in years, so presumably these incidents will go right on happening. Similarly, no great improvement is to be expected in all the other causes, so realistically, we’re looking at perhaps a reduction of incidents by about 1/6 – not the order of magnitude implied.

Now let’s see if we can get an estimate of how many of these incidents will be significant. I was able to download a spreadsheet documenting all the pipeline incidents in Alberta from 1970 to date. It’s quite an impressive list – almost 62,000 incidents. Boiling it down to crude oil pipelines from 1990 on (the same as the pie chart) gets it down to a more manageable 393 incidents, of which 33 were 100 m3 or greater, and 111 of 10 m3 or greater. So, based on historical data, we’d expect 111 x 3/20, or 67 incidents of 10 m3 or more in the 3,000 km proposed stretch in Ontario over a 22 year period. That’s about 3 a year. The improvements in corrosion detection might reduce that to 2.5/year. Improvements in the leak detection models can be expected to reduce the spill volume somewhat. Realistically, then, the pipeline in Ontario is going to have a significant spill once or twice a year. There may also be a number of smaller leaks that remain undetected indefinitely.

Spilled oil, unlike leaked natural gas, is not susceptible to discovery by aerial pipeline patrol. Dilbit, in particular, can remain on a river bed, or drain down into an aquifer, and is extremely difficult to clean up.

There will be spills from this pipeline that have the potential to contaminate rivers or aquifers in Ontario. Perhaps the reason that they are not high on some people’s list of concerns is that the proponent has done a good job on allaying fears. It would appear that such fears are in fact justified.