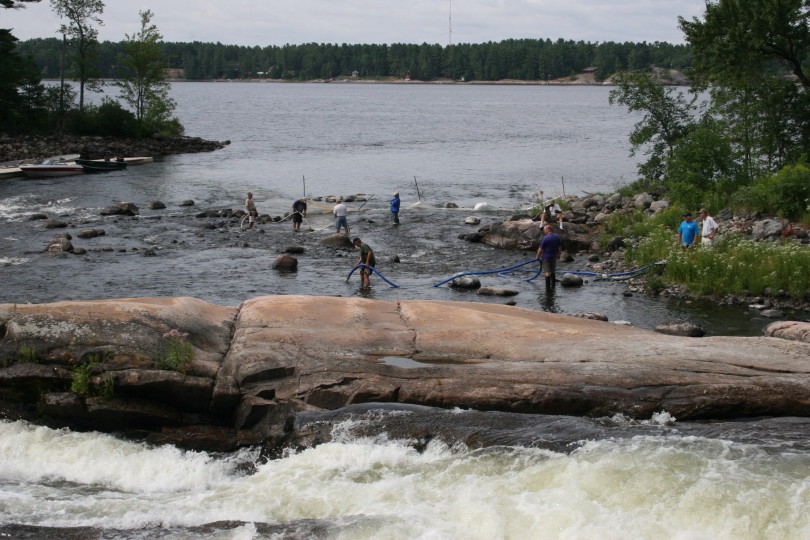 Scientific studies based upon the Fall Walleye Index Netting Protocol (FWIN) were initiated.  The FWIN program is designed to measure the relative abundance, size and age distribution, mortality, growth rates and conditions of a walleye population.

Based on the initial studies a French River Management Recovery Plan was instituted in 1993.  The goals of the plan were to improve the yield from the fishery, reduce fishing mortality on maturing and mature walleye to increase spawning stock, and to ensure overfishing does not occur.  All this without reducing recreational fishing opportunities.

The key component to achieve these goals was the slot size instituted to protect maturing and mature walleye.

The French River Stewardship Council partnered with MNR Sudbury during the fall of 2013 and completed a FWIN to assess how the plan was working 20 years after its inception.

The most exciting news that can be reported is that the walleye population in Eighteen Mile Bay and Ranger Bay is growing and rebounding with a moderate number of spawners, and three strong year classes of immature fish that should start to spawn in 2015, 2016 and 2017.

This is particularly exciting for the Stewardship Council as we have spent substantial amounts of money as well as volunteer hours cleaning spawning beds in this area, and have actually built two new beds below Oullette Rapids.  These two new spawning beds were active this year and will contribute to a strong year class in this area. These fish should reach maturity and spawn in 2018 or 2019.

For the balance of the river, since the regulation changes more fish are reaching maturity, there is a more balanced distribution of ages, mortality has decreased and the population is growing slowly.

The fishery that was feared to be collapsing as recently as 1997 and 98 now has a good chance of increasing, protecting populations for recreational users and the tourist operators.

The French River Stewardship Council is now attempting to raise funding for a review of the French River Fishery Management Plan, with more scientific studies and spawning habitat improvements to our fishery.