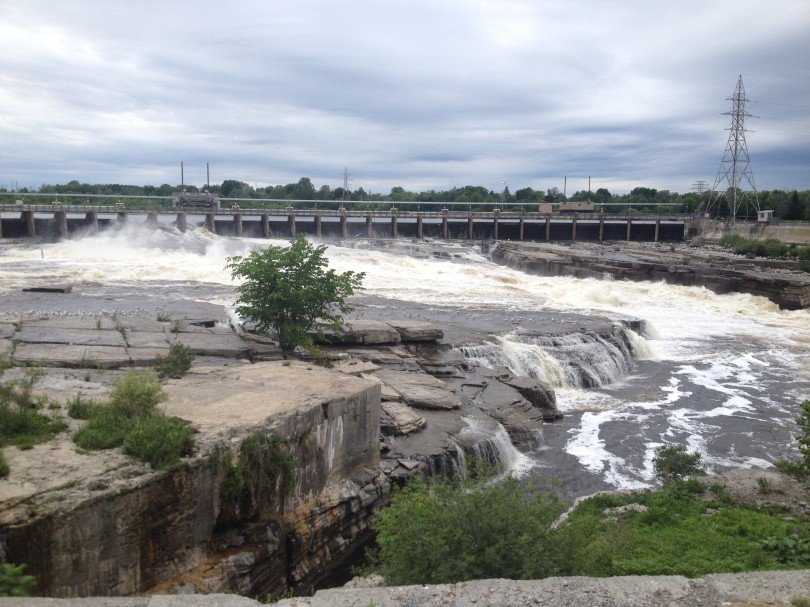 Located between Ottawa, Ontario and Gatineau, Quebec, Chaudière Falls were second only to Niagara, and many people once considered them more interesting in their variety and setting. The main feature was the Asticou, or “Big Kettle”, where the waterfall came into almost a full circle. It was once a greater arc than Niagara’s infamous Horseshoe Falls. Over eons, the fierce water flow had worn the stone at the base into a giant bowl. The water would swirl around and bubble up, like boiling water. There would always be a mist, and on a bright summer day one would be sure to see a rainbow.

Towards the Quebec side was the Lost Chaudière, where the area was completely encased in stone. Much to the wonder of visitors, the water would flow in but wouldn’t come out again – it was travelling through an underground channel, reappearing further down the river.

The Chaudière Falls were Ottawa’s oldest and most beloved tourist attraction. We have been described as a “City of Cascades,” with the falls being “a hundred rivers struggling for a passage”.

When the City of Ottawa petitioned Her Majesty Queen Victoria to have the City designated as Canada’s capital in 1857, Lady Head, wife of Governor General Sir Edmond Head, painted the falls from Major’s Hill Park. This painting was part of the package, and the beauty of the scene portrayed influenced Her Majesty’s decision.

The area surrounding Chaudière Falls is considered sacred to Anishinaabe people throughout Turtle Island, and is known as Asinabka (“the place of glare rock”) to Algonquins.

In 1613, on his journey up the Ottawa River, French explorer Samuel de Champlain observed “savages” making tobacco offerings to the spirit of the falls. Chaudière Falls is akin to an Anishinaabe cathedral. This is a place that everybody can be part of and take inspiration from. Poets understand this. On May 16th, 1876, William Pittman Lett wrote:

Go, Atheist, stand on its brink
And for a moment pause and think
While gazing on this mighty link
In grand old Creation’s chain!

Algonquin Grandfather William Commanda of Kitigan Zibi Anishinabeg, wanted the Chaudière Falls freed, Chaudière Island re-naturalized as parkland, and an Indigenous healing and peace centre built on Victoria Island. Many people support this vision, which can be read here.

Grandfather Commanda was the keeper of three sacred wampum belts, held the position of Chief of Kitigan Zibi Anishinaabeg and founded the Circle of All Nations. Grandfather Commanda was named an Officer of the Order of Canada and presented with the Key to the City for his environmental and peace initiatives. His vision needs to be realized.

Others have supported freeingChaudière Falls – the Council of the City of Ottawa wanted to do this in 1998. Jean Pigott advocated undamming the Chaudière falls when she was in charge of the National Capital Commission. This idea isn’t new.

Chaudière Falls is located in the heart of unceded Algonquin territory. The Royal Proclamation of 1763 prohibited the settlement of Indigenous lands unless they were first ceded to or purchased by the Crown. This wasn’t done here – the Algonquin people were simply pushed aside, and have been petitioning for their title for over 250 years.

The Chaudière Falls and surrounding islands are not privately owned. They are on Crown Land, which the federal government is supposed to administer of behalf of all Canadians. Chaudière Island, Albert Island and a portion of Victoria Island were leased to wooden match maker and pulp and paper manufacturer E.B. Eddy Company at the beginning of the last century, for an annual payment of $100.00. This was so the mighty Chaudière Falls could be harnessed for lumber, and pulp & paper production. At the time, this decision was considered to be in the best interest of the public.

In 1998, the E.B. Eddy Company became a division of Domtar Inc, the second largest paper manufacturer in the world. In 2007, Domtar closed its Ottawa and Gatineau location, ending the industrial use. In December 2013, Domtar Inc. signed a Definitive Agreement of Purchase and Sale with Ottawa-based developer Windmill Development Group Ltd. for the proposed sale of the former Domtar paper mill site in Ottawa and Gatineau for millions of dollars.

The islands surrounding the sacred Chaudiere Falls may potentially be re-zoned and slated for development in October 2014. Hydro Ottawa has somehow been given a new and separate lease on the Ring Dam, on the site of the falls, which they plan to refit for increased electrical generation. This isn’t necessary, as there are better ways of generating power from the Ottawa River.

The Government needs to consider what use would be for the greater public good now. Ottawa is the only national capital in the world with a major waterfall at its centre. I once spoke with a Carleton University professor who exclaimed “London has the Thames. Paris has the Seine. We have a waterfall!”

Note:  This article is for information purposes and does not represent the views of Ontario Rivers Alliance.