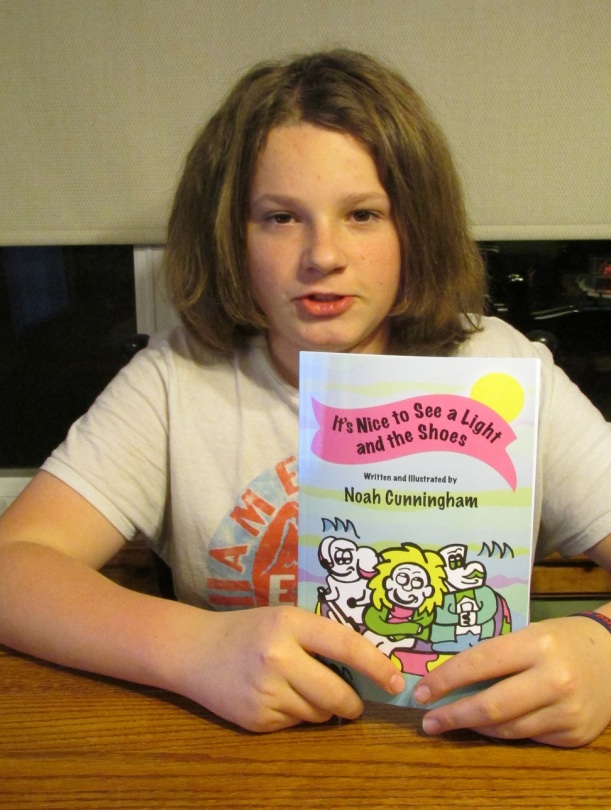 A twelve year old from the Ottawa Valley has put his superhero storytelling to work in order to highlight excessive resource extraction.  The children’s chapter book, It’s Nice to See a Light and the Shoes, was endorsed by the Ontario Rivers Alliance (ORA).  “While this is just a fictional tale, there are many parallels to some of the challenges communities face when a hydroelectric dam takes control of a river they depend on, and where very few benefit at the expense of many,” relates Linda Heron, ORA Chair.  “ORA highly recommends this creative and humorous tale of a community showing up to shine a light on an injustice, and in the process find an unlikely hero in their midst.”

Author and illustrator, Noah Cunningham says, “I wanted to show how a community could be affected when a private corporation, Water Enclosure Society (W.E.S.) takes away the water from the river for power and profit.” Cunningham further reflects on reality around us, “You don’t see it, but it’s happening,” he adds, when discussing excessive resource extraction without much thought to the balance of the ecosystem.  He says he decided to get the entire community to step up in his fictional superhero story, where two detectives and a dog set out to save the planet and their town from corporate villains. If allowed to do their dastardly deeds, W.E.S. would not only own hydro power but the water too, taking it for their own profit.  Cunningham says anyone can be a superhero if they just stand up for what they believe in.

Of ORA’s endorsement, the author and illustrator is excited, “The organization is like the community in my book all put together. They are doing awesome stuff that I wanted the people in my book to do.”

Cunningham, who usually writes superhero stories, says he accumulated the characters through suggestions by his family and the character, Mr. Micman, is actually his own wiener dog.

So what’s next for the superhero writer, well he is already busy writing a sequel where the sun goes missing.

Cunningham’s book can be purchased through contacting him via his website www.noahcunningham.ca  or through General Store Publishing House www.gsph.com .  The illustrated chapter book retails for $9.95 and is targeted to kids ages 9 to 13.