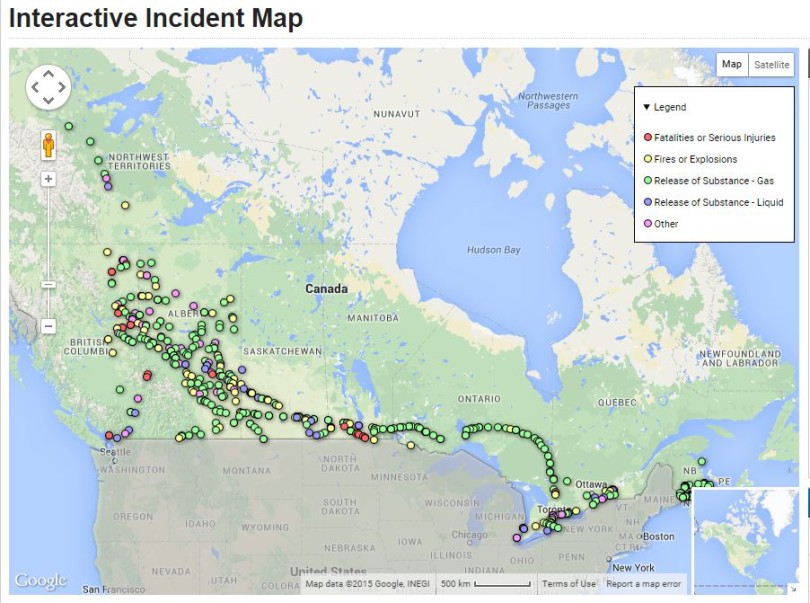 Clicking on the Map will allow you to search for release incidents.

In Ontario, the Energy East (EE) pipeline will be a converted 42” diameter gas pipeline.  This will make it amongst the largest diameter crude oil pipelines in North America.  Its capacity will be almost twice that of the proposed Keystone XL pipeline.  The length of the line in Ontario is about 2,000 km.  The pipeline material is steel.  Over 95% of its length in Ontario is clad with fusion bonded epoxy (FBE) to provide protection from corrosion.  FBE is the best available coating.  The remaining 5% is coated with inferior materials that have proven to be problematic.

The pipeline to be converted has already been in the ground for 20 to 40 years.  While TransCanada’s (TC) application does not appear to differentiate between newer and older pipe, there are a number of factors that indicate that old pipe will be more prone to failure.  For example, the old pipe will have been subject to repair over the period it has been in the ground, and repairs are more prone to failure than newer material.  Also, some portion of the old pipe’s fatigue life will have been used up, making it more prone to metal fatigue failures (leaks).

There is no indication of how many years the converted line will remain in service, but the probability is that it will be there for several decades.

Reference to the Alberta government’s database shows that over a recent 22 year period, for the 5,000 km of crude oil pipelines over 16” in diameter, there were 9 spills with a volume over 10 m3, of which all but one was greater than 100 m3.  The average pipeline diameter for these 8 spills in Alberta was 24”, the average released volume was 1,400 m3, and the average amount of spilled material recovered was 27%.  While there is no definition of the size of an environmentally significant spill, it is fairly obvious that at least the ones over 100 m3 would be significant.  So, despite TC’s goal of zero leaks, history would indicate there will be a number of spills in Ontario.

TC has fairly limited experience in operating crude oil pipelines.  They only own one – the Keystone pipeline, which goes from central Alberta to southern Manitoba, then turns south into the central US.  All their other lines transport natural gas.  In its first year of operation, the Keystone line experienced one significant spill of 80 m3, at Ludden, North Dakota.

The EE application ignores what may be a very significant threat.  Throughout its length, the converted line will be located within 10 metres of one or more existing gas pipelines, which have a history of failing periodically.  When a gas line fails, there is nearly always an explosion, which could damage the nearby oil line.

Of perhaps more concern than the number of spills is the volume of them.  For the converted line, which has three times the cross sectional area of the average 24” diameter line in Alberta, we’d be looking at an average leak volume of 4,300 m3.  The converted line is required to have a leak detection system (LDS), but there are no requirements on the performance of this system.  TC’s application indicates that their LDS will detect leaks as small as 1.5% of full flow.  For the converted line, that’s 2,000 m3 per day, or about the size of ten small houses.  Anything smaller will only be detected when it is found by aerial survey, or ground patrol.  These inspections typically are scheduled every few days.  Even for larger, detectable leaks, review of the incident reports shows that the LDS often provides very dubious indications that a spill is in progress.  For the largest spill in Alberta, for example, the 4,500 m3 rupture of the Plains Midstream pipeline north of Edmonton in 2011, it took 8 1/2 hours before a shutdown was initiated, despite the fact that approximately 33% of the line’s flow was escaping.  The owners “…alarm response protocol…” exhibited a “potential bias towards inaction”.

In practice, shutdown action is typically not taken until a report form an onlooker provides visual confirmation of a failure.  TC claims that leaks annunciated by their LDS will be ordered shut down within 10 minutes, and flow would stop within 22 minutes, but history makes it very difficult to believe this claim.

Spilled material, or at least detected spilled material, has to be cleaned up, so when you think about it, from the proponent’s point of view, it’s not to their advantage to detect spills, since cleanup is expensive.

There are a number of technologies available which can detect volumes of material much less than 1.5% full flow.  In fact, both TC and Enbridge have funded a research project (ELDER) to evaluate a number of these technologies, but they are likely to be expensive, particularly for retrofit application.  But again, thinking about it, even if they could be installed at zero cost, there is a strong disincentive for the proponent to do so, since more detected spills means higher cleanup costs.  So, unless the regulator mandates more effective leak detection we are unlikely to see it happen.

ORA has applied for Intervenor Funding and, if approved, will address these and other concerns related to the EE Pipeline.