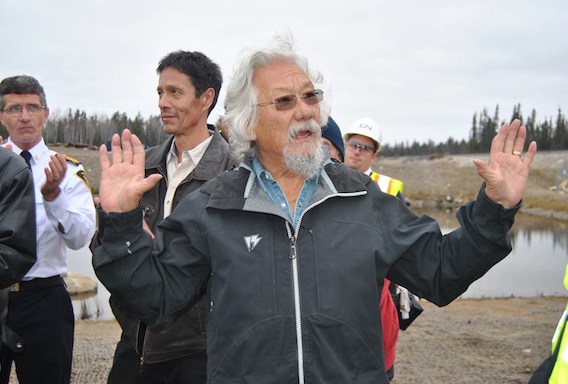 Dr. David Suzuki was amazed there was no jail time over this.

Mileage 111.6 and 88.7 are respectively synonymous with February 14th and March 7th of 2015. These significant numbers represent the locations and dates of the largest train derailments in the history of the province of Ontario. Two CN trains carrying Alberta tar sands crude oil derailed and exploded into huge fire balls one week and 23 miles apart, releasing millions of liters of bitumen crude oil into the environment. The first derailment, occurring in a remote wooded area, and the second at the bridge crossing the Makami River, less than 2 km from the Town of Gogama.

Thirty-four kilometers south of there, along Highway 144, you will find a sign that says…  “Artic Watershed – from this point all waters flow north”. The Makami River is the focal point and headwaters of the great Mattagami River system which flows through northeastern Ontario to James Bay. This is where it all begins, and in fact the native name Makami means, where the river begins. The residents of Gogama and Mattagami First Nation, as well as all communities along the Mattagami River, including the City of Timmins, rely on this river as a drinking water source. This once pristine wilderness area, a main food source for the local Indigenous people is also the source of tourism revenue for the local economy.

Within days of the fire being extinguished, the rail line was reestablished, and work on remediation slowly began. The challenges of winter ice and snow presented difficulties in preventing oil from flowing downstream towards Lake Minisinakwa and eventually into the Mattagami River. Absorption booms were set up and samples collected and analyzed on a regular basis.  However, the warmer temperatures of spring and summer allowed for more intensified efforts, where oil was removed from the river banks and bed. Hundreds of loads of contaminated soil was trucked to a Ministry of Natural Resources and Forestry land fill site in another watershed, in Cartier.  Throughout the summer of 2015, residents were reporting oil and dead fish floating in Lake Minisinakwa, and washing up on its shore. The oil was recovered and the dead fish collected and sent to labs for toxicity analysis. Ironically, all the while the regulators were stating the water and fish were fit for human consumption and there was no significant hazard to human or wildlife.  All remediation work ended in the fall and only monitoring through audited sampling occurred to this past summer.

In July of this year, CN released a statement declaring they had met all of the regulators’ guidelines, remediation had been successfully completed, and a comprehensive remediation report was issued. This report indicated levels of contaminants beyond ministry standards at several testing stations, but reports of dead fish and oil still washing up on shore were ignored.

This prompted a huge campaign involving the communities led by Nickel belt riding MPP France Gelinas. Meetings were held, letters were written to the ministers, petitions signed and presented.  At the same time site tours were conducted to show oil rising from the sediment from a mere stick poke into the river banks, and a peaceful protest along Highway 144 was held near the site on Thanksgiving day.

This campaign caught the attention of world renowned environmentalist Dr. David Suzuki who was protesting at Queen’s Park on October 20th, when Gogama Fire Chief Mike Benson and Mattagami First Nation Chief Walter Naveau were also there to pressure the Minister of the Ministry of Environment and Climate Change for action.  That day an invitation for Dr Suzuki to visit the site was extended and accepted.

Through these efforts, CN was ordered back to site to further clean and remove oil from the river on October 31st 2016.

On Friday November 18th, Dr. Suzuki toured the site of the Makami river derailment. He was astounded at the fact that after almost two years, he had not heard of this environmental disaster. A heated discussion with a CN representative ensued and Dr Suzuki did not mince words as he shouted to this individual that he could not repair this damage, “it would take a thousand years to repair what was done here”. “I am surprised no one has gone to jail for the crimes against Mother Earth” he stated. Dr Suzuki passionately spoke about what needs to occur for nature to have a chance at cleansing and repairing itself. “We must first find a platform of agreement to satisfy the needs of all of the parties involved so that we can all work together to achieve the common goal”. “We must remove all of the oil we possibly can and then, only then will nature have a chance to remediate itself”.

Dr Suzuki then spoke at a public meeting in Gogama, further reinforcing what he had stated at the site. His message also focused on the need to listen to the Indigenous peoples, they are the keepers of our land and have a deeply rooted connection with all aspects of nature. He listened to the impact stories of residents. Concerns raised over diminished authority and lack of resources by the regulators and ministries charged with the protection of our environment and natural resources, which prompted a passionate response from Dr Suzuki on how he started as an activist and advocate for the environment.

Dr Suzuki, it was an honor and a privilege to have been part of this monumental day. Thank you sincerely. 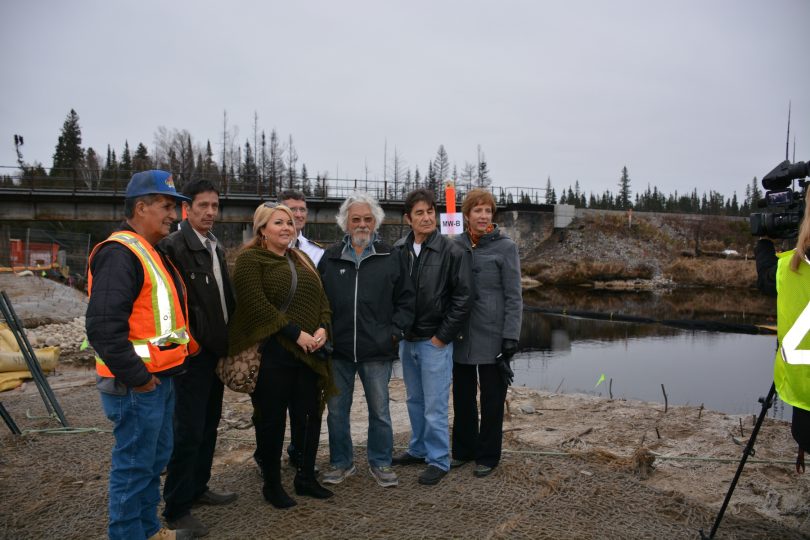 From my personal experiences throughout this ordeal, I can honestly say that I have recognized the need for non-governmental organizations like the Ontario Rivers Alliance, who were engaged right from the beginning. The time has come to stop relying on the regulators that are, as of late, only capable of quickly responding to environmental disasters to investigate and merely report on what has happened often leaving the public to fend for themselves. In my opinion, there clearly needs to be a change in focus from just reacting to spills, to also include prevention. Oil will be transported  with trains and pipelines – that is a reality. What needs to occur are better tanker cars and safer rail lines, as well as safe crude specific designs for any proposed pipelines, and a much improved leak detection system.

I long for the day when we as a society abandon the need for fuels so damaging to the environment, and evolve towards a greener and more environmentally sustainable energy approach.

Visit the Friends of the Makami River Facebook Page here.