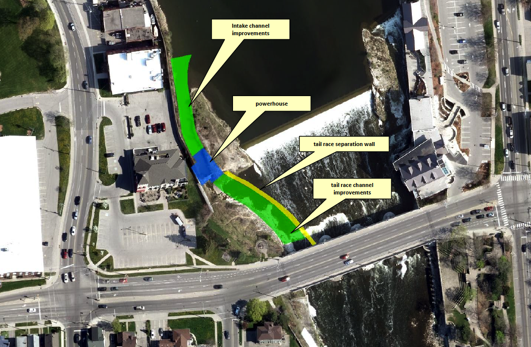 In September of 2016, the Grand River Conservation Authority (GRCA) received a Feed-in-Tariff Power Procurement Contract from the IESO to sell power to the grid.  In June 2017, the GRCA initiated a Class Environmental Assessment to evaluate the construction of a waterpower project, the Parkhill Hydro Generating Station located at the existing Parkhill Dam in the City of Cambridge. If approved and constructed, this waterpower project would have a nameplate capacity of 500 kW. The project is subject to the provisions of the Ontario Waterpower Association “Class Environmental Assessment for Waterpower Projects.” Pursuant to the Class EA, this project is considered to be associated with existing infrastructure. END_OF_DOCUMENT_TOKEN_TO_BE_REPLACED

ELORA – Elora Power Corporation (EPC) is planning to undertake an environmental evaluation and assessment for a proposed waterpower project along the south bank of the Grand River, adjacent to the Drimmie Dam near Ross Street and Wellington Road 7.

If approved and constructed, the Elora generating station would have a capacity of one megawatt (MW) and annually produce 3,800 MW hours of renewable energy.

As part of the proposal, the existing small hydro station on the north side of the river adjacent to the Elora Mill would be removed and its flow re-directed to the proposed Elora generating station.

The project is subject to the provisions of the Ontario Waterpower Association “Class Environmental Assessment for Waterpower Projects”and would be considered to be associated with existing infrastructure (Drimmie Dam) and on a managed waterway (Grand River).

The proposal may also be subject to the Ministry of Natural Resources’ “A Class Environmental Assessment for MNR Resource Stewardship and Facility Development Projects.”

The environmental assessment process requires the company to evaluate the project’s potential effects on the environment – both positive and negative and during both construction and operation – and prepare a detailed environmental report.

EPC has identified certain environmental components that are expected to be the focus of the proposed project. Public consultation will be an integral component of the process.

Grand River Conservation Authority communications manager Dave Schultz said GRCA engineers were aware of the owner’s interest in developing water power on the south side of the river.

He explained that in the 1850s water power was developed on both sides of the river. The former mill race ruins still exists at the Little Folks property site.

Now that Landmark owns both sides of the river at the Elora Mill, Schultz said the idea was to consolidate the generating capacity in one location rather than two.

He added both properties had established water rights for power generation.

But, Schultz said, a lot depends on whether the proposal can get the required permits from the province. He explained the 1 MW proposal is several times larger than the current 140 kw generating station at the Elora Mill.

“A key question of an EA is the impact a plant of that capacity would have (on the river),” he said.

However, Schultz did note that removal of the water intake for the current mill generating plant would allow for a better Drimmie Dam.

He added discussions with the proponents could result in the current reconstruction work including provisions for an electrical generating station on the south side of the river.

EPC is holding public information session on the Elora generating station small waterpower project on Oct. 10 at the Elora Mill from 2 to 4pm and from 5 to 7pm.

At that time, EPC and consultant staff will be available to explain the information displayed, answer questions and receive comments.