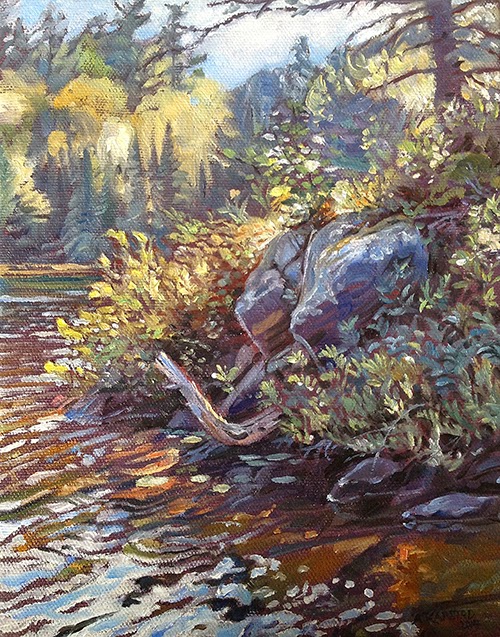 This is a report on our independent assessment of the ecology of rivers and streams that the Energy East Pipeline would cross. This pipeline would carry “diluted bitumen” from the Athabasca Tar Sands of Alberta to refineries and export in Montreal, the Gulf of St Lawrence, and the Bay of Fundy. Our scheme for our Energy East project was to parallel the pipeline route to existing obligations at the New Brunswick Museum’s August bioblitz in Gagetown, and then to the Canadian Herpetological Society’s September meetings in Calgary. Our reports on our visits to sites are posted in our Blog here.

We visited some crossings in Ontario through spring and early summer.

In the late summer we explored the route to and from New Brunswick, then rushed west across the Prairies, and most recently visited the Tar Sands area to see the source of the product that the line would transport.

The organisms we focus on – “reptiles” & Amphibians, aquatic macroinvertebrates (mussels, Crayfish & snails), invasive Plants, and terrestrial Molluscs (slugs & snails) – are usually neglected in official site assessments for such enterprises. Inspired by last winter’s Sustainable North Grenville/Council of Canadians meetings on the local impact of the pipeline, we decided to use our ‘Landscape Art and Science’ methods to look at places where the pipeline route crosses streams. We hope that our reports may serve as a salutary check on the proponent’s own environmental assessments – and in any event will preserve a record of might be lost if sites along the route were to be subject to spills of the hard-to-remedy product.

After a winter of planning, with one winter painting of the crossing at Hoople Creek, near Ingleside, we visited four pipeline crossings near home in June and July, with a painting at each. We work from a little Boler trailer, pulled by a capped 2003 Ford F1 pickup.

After the fund-raiser generously hosted on 20 July by the Branch Restaurant (and Texas Grill), we set out for the New Brunswick bioblitz at the beginning of August, visited crossings through Quebec, and afterwards the eastern terminus of the route on the Bay of Fundy east of Saint John.  Aleta accomplished several paintings, we were generously hosted by concerned New Brunswickers, and we gave a slide presentation and display of paintings in the Library at Plaster Rock.

Coming back across Quebec, we visited several crossings which, since no pipeline runs along the route east of Montreal, were just waypoints on the shore, but we painted the proposed site of the major crossing of the St Lawrence just above Quebec City.  Thorough habitat descriptions were written at every crossing we visited, and exciting discoveries of fresh water mussels were made at several locations on this eastern leg of the expedition. We recorded observations of invasive plants along the roads, and where earth moving equipment had spread them. Aleta sold a few of the paintings she had finished along the way, and Fred laid down 867 database records of visits or species observations.

We arrived home in Bishops Mills on 2 September, with just enough time to accomplish truck maintenance and trailer repairs, and to re-provision and pack for the western leg of the expedition. After four days at home we said goodbye to the two-year-old grandson and other family members, and headed off to North Bay to be taken on a canoe trip to explore and paint the source of the Mattawa River at the point of the Transcanada Pipeline crossing.

After that planned excursion, time for travel was short, and we quickened our pace across western Ontario where the Transcanada Pipeline parallels Highway 11, to the Manitoba border. We stopped only at our long-term amphibian monitoring site along Hwy 11 south of Cochrane, where the pipeline crosses the highway. We realized that Fred’s been coming back to check the frogs there for 42 years – his longest-term monitoring site!

Fred’s account of the Trans Canada herpetology of this trip was the second item on the agenda at the meetings of the Canadian Herpetological Society in Calgary on 13 September – so Aleta kept on driving – hurling the expedition across Ontario and the prairie provinces, while Fred kept his thumb on the GPS, taking notes of what we could see from a moving vehicle. It’s when you hurry across Canada by road that you realize how big it is! We met unseasonal snow northeast of Longlac, and many interminable stretches of the Prairies were driven at night, in order to arrive just in time for the conference.

After the conference, and visiting relatives in Calgary and Edmonton, we were freed from fixed engagements, and we decided we needed to see what we could of the source of the material to be transported: the exploitation of the Athabasca Tar Sands. So in a final outward rush, we drove the 450 km NNE to the banks of the Athabaska River. This “Highway of Death” has historically been narrow, rough, and dangerous, but it’s being rebuilt and twinned to be wider and smoother than the 401. We visited publicly accessible sites around Fort McMurray, posted one completed painting to the blog, examined the habitat of “remediated” sites, and surveyed the places where there was access to the Athabasca River.

Now we are in Edmonton, back from Fort McMurray, and tomorrow will start a month working east from the northwestern terminus of the pipeline, across the Prairies and northern Ontario towards an appointment to arrive in North Bay, on 1 November to attend the Ontario Rivers Alliance (ORA) Annual General Meeting. There we will make a slide presentation to the ORA membership on what we’ve found on the expedition.

We’ll be home soon after this talk, with a winter of completing paintings, and processing data and specimens, ahead of us. We plan to paint the local crossing, at Baxter Conservation Area, after the Rideau River has frozen over. For now we’re posting results on the Blog – and incidents on the Facebook page .  Visitors to the blog can read accounts of site visits, bid on paintings, or make contributions towards covering our expenses. Over the winter we plan to construct a web site of all the natural history data we can assemble from the vicinity of each crossing all across the country. Aleta tweets at @akarstad #FragileCrossings

We’re immensely grateful to all who have contributed to this project, both at the Branch fund-raiser and on the Indiegogo crowd-sourcing campaign (as Fred writes this, Aleta is e-mailing thanks to the 61 contributors to the Indiegogo campaign). For the rest of the trip we’ll be moving at only 100 km/day, so we’ll have time to make lots of careful observations and paintings, hopefully worthy of the generosity that our supporters have shown.