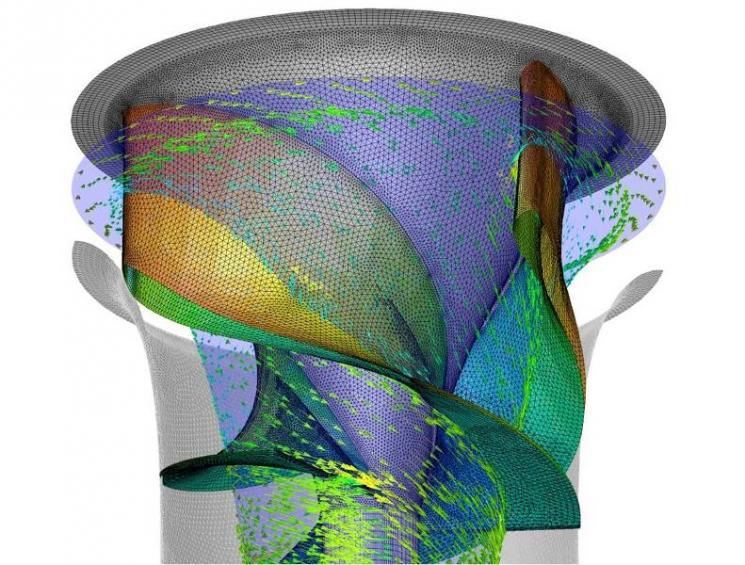 A revolutionary new turbine technology for hydropower plants is one step closer to its first commercial deployment. The Alden Fish-Friendly Turbine could change the game for hydropower generation in the United States, and it is likely to have significant export potential.

Scientists and engineers at the Electric Power Research Institute (EPRI), Alden Laboratories, and their partners have designed a new turbine that reduces fish passage injury and mortality, while effectively maintaining power production. EPRI recently released the full technical report of prototype testing. Building on over a decade of support from the Energy Department, EPRI and its project partners were recently selected to deploy and test the Alden fish-friendly hydropower turbine over the next three years. EPRI plans to deploy the 10 megawatt Alden Turbine at the Brookfield Renewable Power School Street Project in Cohoes, New York, bringing project’s generation capacity to 48 megawatts.

Hydropower already provides nearly 7 percent of the nation’s electricity, and it holds tremendous potential for expansion. Yet that promise comes with the unique challenge of developing water as a renewable energy resource in a way that minimizes disruption to sensitive ecosystems and mitigates impacts to fish and other aquatic wildlife. Some hydropower projects have created issues for migratory fish, such as blocked passages and turbine-induced mortality. Spilling water or installing bypass technologies can allow fish to pass through unharmed, but they also compromise a significant amount of power production—to the tune of 8,500 MWh per year and at a cost upwards of $700,000 per project.

To better address this trade-off, the Energy Department and Alden first started working together to design a fish-friendly turbine in 1995. Results from the initial biological analysis at Alden’s Holden, Massachusetts research facility were unprecedented, with anticipated survival rates nearing 100 percent for nearly 40,000 species of fish.

In 2009, the Energy Department supported EPRI to continue development of the Alden design for eventual deployment at commercial scale. Energy Department funding enabled a critical round of testing and developmental engineering at the Voith Hydro Hydraulic Test Stand Facility in York, Pennsylvania. Those trials yielded results that exceeded expectations: at peak performance, an Alden turbine should convert about 94 percent of the water’s energy into usable electricity, comparable or superior to the efficiency of traditional turbines; the overall wildlife survival rate should be over 98 percent, up from 80-85 percent for a traditional turbine.

The fish-friendly turbine achieves this balancing act thanks to a fundamental design innovation that could enable the ecologically-responsible development of thousands of megawatts of hydropower resources. Most conventional hydropower turbines have between five and 18 fast-spinning blades, separated by gaps. The blades can strike and injure fish, and the gaps can trap them. The Alden turbine, by contrast, has three blades, no gaps, is bigger and rotates more slowly. These measures significantly reduce the danger of trauma or death to fish passing through, yet the turbine’s larger size and other design considerations are optimized to preserve high efficiency and energy production.

The successful demonstration and testing of this innovative fish-friendly technology over the course of the next three years will be a crucial step toward moving the turbine closer to commercial deployment, with the potential for application at hundreds of existing water power projects across the country. For more information on the Energy Department’s efforts to advance hydropower technology and reduce environmental effects, see Water.energy.gov.