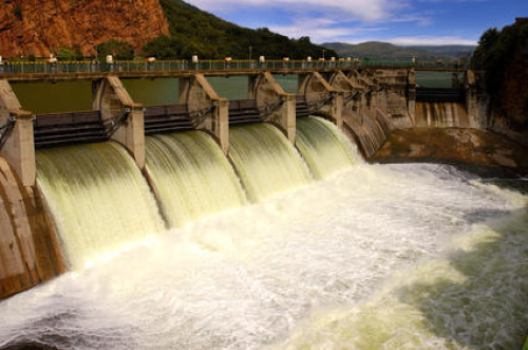 Bridget Deemer, a doctoral student at Washington State University-Vancouver, measured dissolved gases in the water column of Lacamas Lake in Clark County and found methane emissions jumped 20-fold when the water level was drawn down. A fellow WSU-Vancouver student, Maria Glavin, sampled bubbles rising from the lake mud and measured a 36-fold increase in methane during a drawdown.

Methane is 25 times more effective than carbon dioxide at trapping heat in the atmosphere. And while dams and the water behind them cover only a small portion of Earth’s surface, they harbor biological activity that can produce large amounts of greenhouse gases. There are also some 80,000 dams in the United States alone, according to the U.S. Army Corps of Engineers National Inventory of Dams.

“Reservoirs have typically been looked at as a green energy source,” says Deemer. “But their role in greenhouse gas emissions has been overlooked.”

Deemer and Glavin’s findings will be on display this week in a poster session at the national meeting of the Ecological Society of America in Portland.

Their efforts are part of a larger attempt to appreciate the role of lakes, reservoirs and streams in releasing greenhouse gases. A study published last year in the journal Science conservatively estimated that the ability of terrestrial ecosystems to act as carbon sinks, storing greenhouse gases, could be one-fourth less than estimated once emissions from reservoirs are considered.

The WSU-Vancouver work is the first to actually demonstrate and quantify the relationship between water-level drawdowns and greenhouse gas releases, says John Harrison, Deemer and Glavin’s advisor and an assistant professor of Earth and Environmental Sciences.

The research could lead to different ways of managing drawdowns, he says, as emissions may be higher in summer months, when warmer temperatures and low oxygen conditions in bottom waters stimulate the microbial activity that produces greenhouse gases.

“We have the ability to manage the timing, magnitude and speed of reservoir drawdowns, which all could play a role in how much methane gets released to the atmosphere,” Harrison says.

Managers can also consider the optimal time to take out a dam, Deemer says. While a dam removal may lead to some greenhouse gas emissions initially, she says it will be a one-time occurrence, while emissions can recur with regular drawdowns. The ability of soils and plants to store greenhouse gases could also make reservoir decommissioning a net sink, she says, but researchers “simply don’t know at this point.”

With Army Corps of Engineers funding, Deemer now plans to look at three other reservoirs in Oregon and northern California’s Klamath basin.

The above story is based on materials provided by Washington State University. Note: Materials may be edited for content and length.