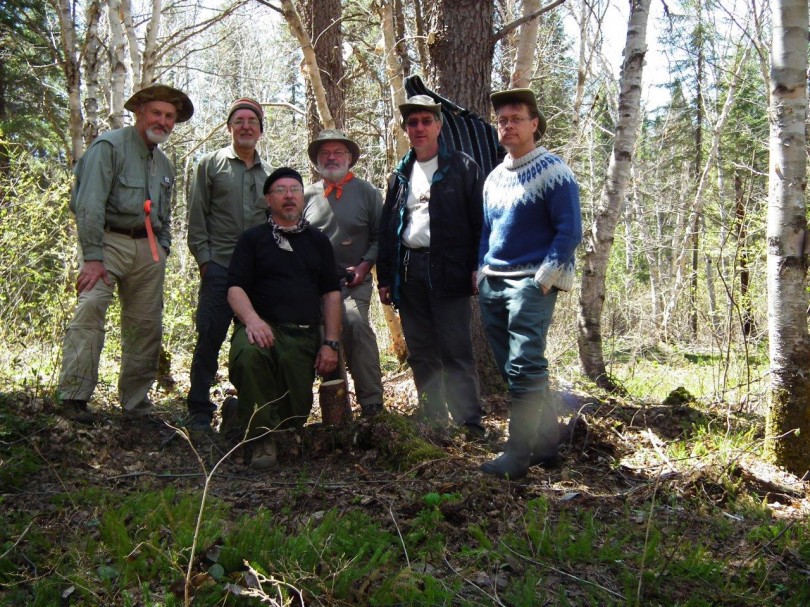 Many years ago, long distance journeys inland were only possible through a complex circuit of rivers and lakes that allowed native residents access to remote territories for hunting, harvesting and territorial supremacy. When the French and the English arrived they also used these natural routes for exploration. The natives had developed an earth friendly inland mode of transportation that was well designed for the environment. The skillfully crafted birch bark canoe was quite versatile and could also easily be transported overland.

Overland trails or “portages” were developed over millennium to allow transportation of canoes and goods around impassable natural river features like rapids and falls. All rivers are born of a water source found at the highest land formation or “height of land”. Over time, portage connections between major river travel routes were established. The story of the Little Hawks is just one example of a long forgotten over height of land routes that helped shape this country of ours. 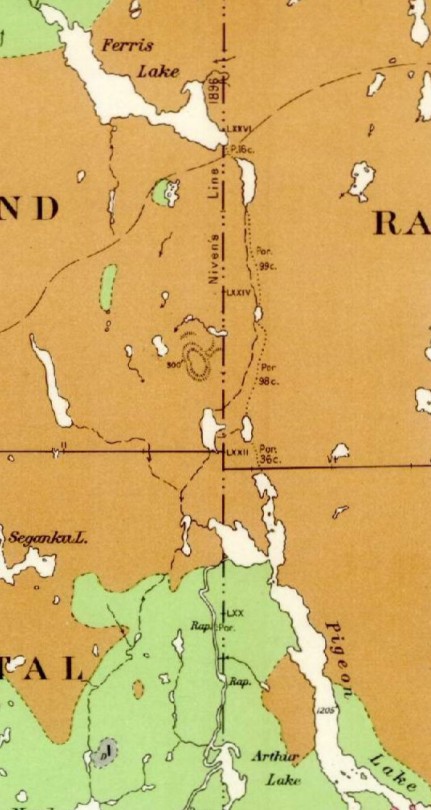 The Little Hawk project started with a request from a group called the Friends of Temagami. A long-time member of the group wanted to find the height of land portage between the West Montreal River and the Grassy River. My original find did not please the requester, as he was looking for the historical connection. Many months later, as I was driving downtown Timmins I remembered that a member of our Friends of Grassy River had handed me copies of historical documents related to geological surveys of 1900. The reading of these archived documents was the beginning of a long 3 year process to the eventual reopening of the historical Little Hawk Portage.

The Little Hawks, as they were commonly known, connect Pigeon Lake on the West Montreal River system to Ferris Lake on the Grassy River, heading north to the Arctic watershed. The portage situated in Raymond Township covers a walking distance of almost 5 km with 3 small lakes intersecting the path for a total distance of 7 km, connecting the Atlantic to the Arctic watersheds.

We were fortunate to meet up with many members of both the Matachewan and Mattagami First Nation communities. The nearest Native community approval was an important part of our venture to access their traditional territories where the portage was located. They agreed to allow us to clear the old pathway while respecting the land and those that travelled the ancient route.

Work teams from Friends of Temagami drove north to be joined by members of Friends of Grassy River who traveled south to initially locate the trail corridor, scout the terrain, mark the path and clear for canoe passage. On our first year of trail clearing the northern leg from Ferris to Ember Lake, I kept hearing a familiar bird call while walking back and forth to our base camp. This call would be heard over and over as we walked by this one location on the trail. I soon came to realize that this call was that of a hawk that was likely nesting very close to the portage. On the night before our departure I ventured close to the source of the call and although I could not spot the nest, I could see a huge pine tree nearby where the cry was originating from. I did not need to get any closer for it was then that I understood where “Little Hawks” must have originated from. This precious moment combined with many more unexpected events deeply rooted our belief that we were on the right path and that the spirits were watching over us.

On Sunday May 26th 2013, both the North and South work teams met at String Lake. We greeted each team member, built the halfway campsite, gathered field rocks and built a fire while exchanging stories of our shared interests. The following two days we would spend grooming the trail and marking key access points. At the Ferris Lake trailhead, standing at the trail entrance by the lake was a huge pine tree. After removing a small balsam I uncovered an old healed over trail blaze marking that was already there to indicate the beginning of the portage. Just slightly above that is where we placed the Portage Sign.

The end of this rather unusual joint venture would be the beginning of new friendships and sharing of similar beliefs with those that deeply care for the land we live on. This would also lead to renewed interest in making sure that other key portages are maintained in order that someday travellers like us can enjoy the nature of rivers the way it was meant to be. To those who venture on canoe routes we offer you the return of the Little Hawks.