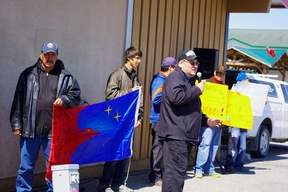 “Our people have said no more dams, our elders have spoken, our women have spoken,” said David Lee Roy Muswaggon, a member of Pimicikamak’s executive council, which along with the women’s council, elders’ council and youth council make up the First Nation’s traditional government structure. “They said no more dams because in the Northern Flood agreement they said, they promised to assess the cumulative effects of existing dams today. We can’t keep building dams without knowing what damage has been done to the current river and lake system for people that do not hunt, fish or trap. Thousands of miles have been eroded. The ecosystem has been destroyed and decimated. Spawning grounds, everything. Our fish are no longer healthy. Our animals are no longer healthy. People need to understand that hydro is not clean and green.” END_OF_DOCUMENT_TOKEN_TO_BE_REPLACED